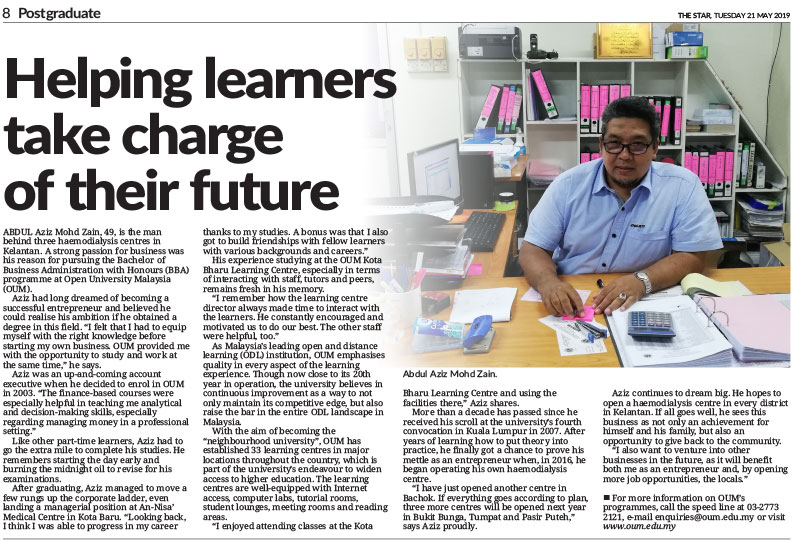 ABDUL Aziz Mohd Zain, 49, is the man behind three haemodialysis centres in Kelantan. A strong passion for business was his reason for pursuing the Bachelor of Business Administration with Honours (BBA) programme at Open University Malaysia (OUM).

Aziz had long dreamed of becoming a successful entrepreneur and believed he could realise his ambition if he obtained a degree in this field. “I felt that I had to equip myself with the right knowledge before starting my own business. OUM provided me with the opportunity to study and work at the same time,” he says.

Aziz was an up-and-coming account executive when he decided to enrol in OUM in 2003. “The finance-based courses were especially helpful in teaching me analytical and decision-making skills, especially regarding managing money in a professional setting.”

Like other part-time learners, Aziz had to go the extra mile to complete his studies. He remembers starting the day early and burning the midnight oil to revise for his examinations.

After graduating, Aziz managed to move a few rungs up the corporate ladder, even landing a managerial position at An-Nisa’ Medical Centre in Kota Baru. “Looking back, I think I was able to progress in my career thanks to my studies. A bonus was that I also got to build friendships with fellow learners with various backgrounds and careers.”

His experience studying at the OUM Kota Bharu Learning Centre, especially in terms of interacting with staff, tutors and peers, remains fresh in his memory.

“I remember how the learning centre director always made time to interact with the learners. He constantly encouraged and motivated us to do our best. The other staff were helpful, too.”

As Malaysia’s leading open and distance learning (ODL) institution, OUM emphasises quality in every aspect of the learning experience. Though now close to its 20th year in operation, the university believes in continuous improvement as a way to not only maintain its competitive edge, but also raise the bar in the entire ODL landscape in Malaysia.

With the aim of becoming the “neighbourhood university”, OUM has established 33 learning centres in major locations throughout the country, which is part of the university’s endeavour to widen access to higher education. The learning centres are well-equipped with Internet access, computer labs, tutorial rooms, student lounges, meeting rooms and reading areas.

“I enjoyed attending classes at the Kota Bharu Learning Centre and using the facilities there,” Aziz shares.

More than a decade has passed since he received his scroll at the university’s fourth convocation in Kuala Lumpur in 2007. After years of learning how to put theory into practice, he finally got a chance to prove his mettle as an entrepreneur when, in 2016, he began operating his own haemodialysis centre.

“I have just opened another centre in Bachok. If everything goes according to plan, three more centres will be opened next year in Bukit Bunga, Tumpat and Pasir Puteh,” says Aziz proudly.

Aziz continues to dream big. He hopes to open a haemodialysis centre in every district in Kelantan. If all goes well, he sees this business as not only an achievement for himself and his family, but also an opportunity to give back to the community.

“I also want to venture into other businesses in the future, as it will benefit both me as an entrepreneur and, by opening more job opportunities, the locals.”