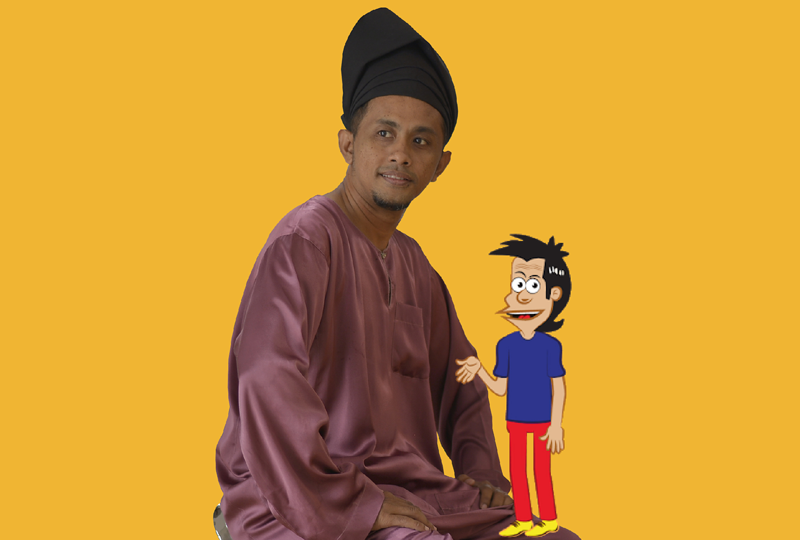 Faizulniza Mazly Zulkifli, also known under his pen name, “Ijoi”, is a cartoonist who has published his own comic book and numerous cartoons for local humour magazines, newspapers and websites.

He has been passionate about drawing cartoons since his teenage years. After completing secondary school, he tried his luck by sending his artwork to Gila-Gila, Malaysia’s highest-rated humour magazine at the time. As a result, he was called to attend a workshop conducted by the late Rejabhad, dubbed the King of Malaysian cartoons. “It was with his help and guidance that I managed to get my very own workpublished in Harian Metro back in 1994,” he shares proudly.

Ijoi completed the Bachelor of Multimedia Communication programme in 2009, then under the Faculty of Information Technology and Multimedia Communication, majoring in animation. While he was still a learner, he was given the opportunity to publish his artwork in Learner Connexions, which was previously an online bulletin for learners.

“In 2007, Sayembara Kartun was born. It was later renamed IjoiCartoon and is the first web comic blog in Malaysia. I used it as a platform to put together cartoons, caricatures, sketches and other kinds of artwork.The blog has received hits not only from locals but also visitors from the United States, Russia and France, just to name a few,” he adds.

Sayembara Kartun was published as an e-book in 2011 and was well received by local comic fans. Ijoi then collaborated with popular motivational speaker, Prof Dr Azahari Othman, also known as Dr LUV, to publish Sekilas Kehidupan, a special motivational book with his illustrations.

“The book was launched by our most celebrated cartoonist, Lat (Datuk Mohammad Nor Khalid). That was very memorable for me,” shares Ijoi.

Besides managing his own graphic design and printing services company, this father of four is also a coach for RTP Soccer Academy in Cheras. “The soccer academy is especially for kids, so I have my sons train there too. Though I’m busy with business and football coaching, spending quality time with my wife and children remains a priority.”

At 46, this talented cartoonist has accomplished a lot. He also has 20 years of experience in graphic design. He was appointed as the Graphic Director for a theatre called Sri Mersing and Art Director for Persatuan Pencinta Seni dan Muzik Malaysia.

However, there is still one particular ambition he has yet to achieve.

“I specialised in animation and I am currently applying all the knowledge that I have gained in publishing an animated series. The animation project is well under way. Slowly but surely, I will get there!”