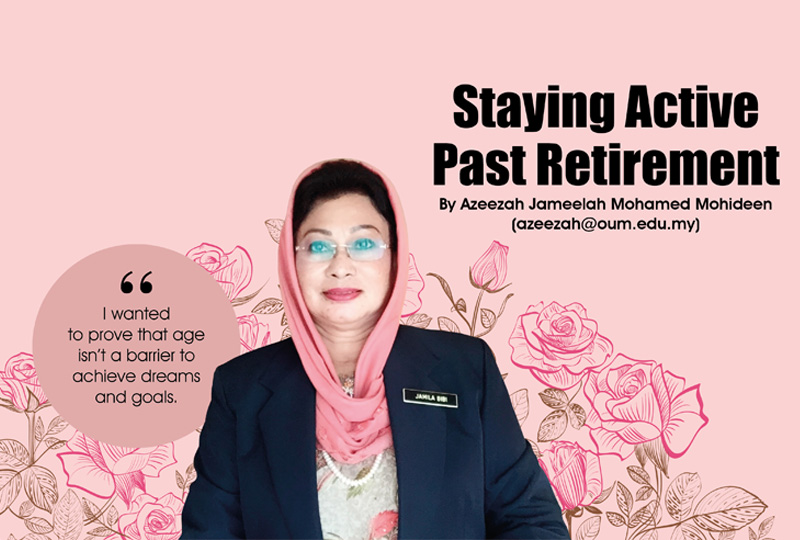 A book entitled Miri, Then and Now, hit the shelves of major bookstores in May last year. The book was produced by the Society of English Writers in Sarawak Northern Zone (Soswe) to provide the younger generation with information on the city’s history. Written by vounteers, the 73-page book recorded the development of Miri in more than two decades.

What makes this book significant to us is that one of our alumni had a hand in its publication. Jamila Bibi Abdul Basah, who graduated with a Master of Education (MEd) in 2014, had contributed a segment on the Miri River.

Says Jamila, who is a Miri resident and Soswe committee member, “The Miri River has undergone many changes to become what it is today. Some of the areas along the river were sacrificed to give way to new townships and landmarks for the city. Some were completely gone, leaving only signboards as memory.

“To find out more about the changes, I interviewed one of the most influential figures in Miri, Tuan Haji Talhah Haji Mansor. Born in 1936, he had settled in Kampung Dagang, which was a village located along the riverbank. He told me of many important events which had occurred in the village. Today, the place where Kampung Dagang once stood has become part of the Miri waterfront. The only legacy left is a road called Jalan Sri Dagang.”

Jamila, 65, is a retired headmistress with four decades of teaching experience. “I underwent teacher training from 1973 to 1974. After graduation, I taught in three secondary schools for 16 years before moving on to a primary school where I served from 1991 to 1996.”

Her career rose further as she was then promoted to school inspector, a post she served for four years before becoming a headmistress. She retired the same year she obtained her master’s degree, so promotions weren’t what motivated her to further her studies.

Says Jamila, “I wanted to upgrade myself as I know that life is a journey of education. I wanted to prove that age isn’t a barrier to achieve dreams and goals.”

She is grateful to OUM for enabling her to continue her studies. “With the flexible hours, I was able to arrange my schedule to study while still working. The staff were friendly and always helpful. The lecturers helped me complete my assignments and supported me whenever I encountered problems with my research. Even though MEd was a tough programme, I passed.”

Jamila adds, “I gained much experience from reading lots of research articles, journals and working papers, which helped me a lot in co-writing Miri, Then and Now.”

She continues to be active past retirement. Besides Soswe, she is also involved in other committees such as for the Global Women’s Peace Network Malaysia, Sarawak Retired Teachers Association, Piasau Nature Park and Gymkhana Club of Miri, as well as two schools.

“While I was serving in the Education Ministry, I was always busy with school life. Now that I have retired, I can devote my time to the hobbies I love.”

Jamila also has a high regard for lifelong learning. She says, “We should never stop learning as it helps those who have reached retirement age to avoid dementia.”